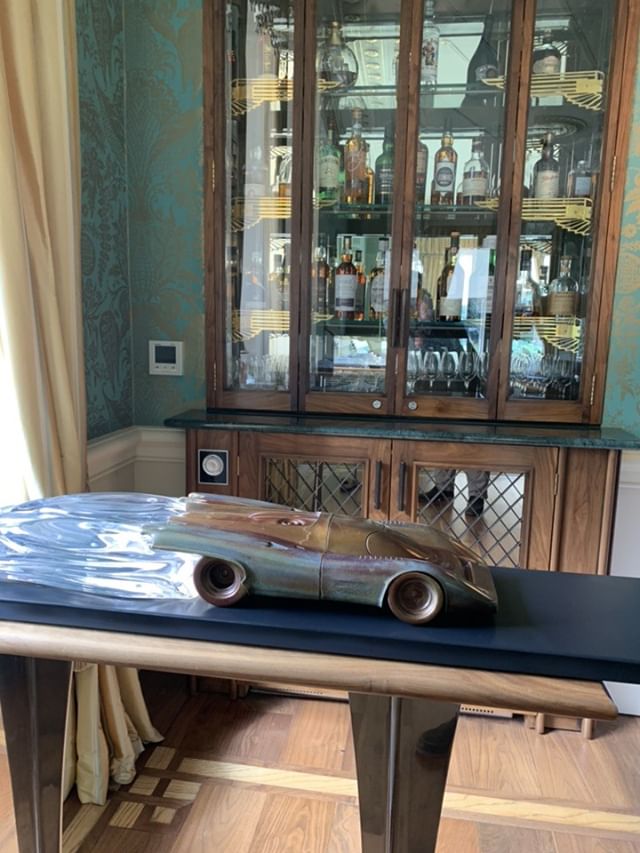 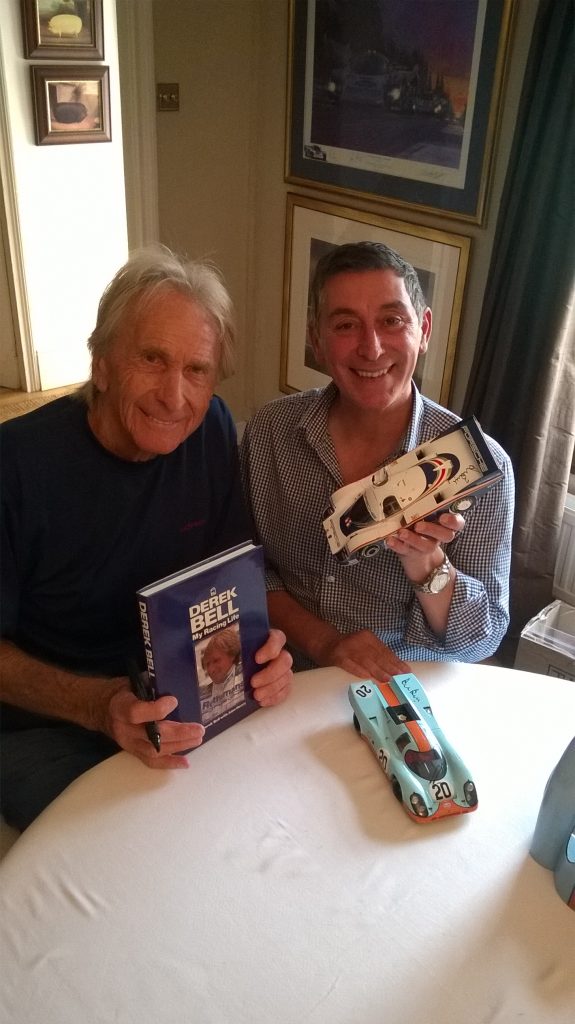 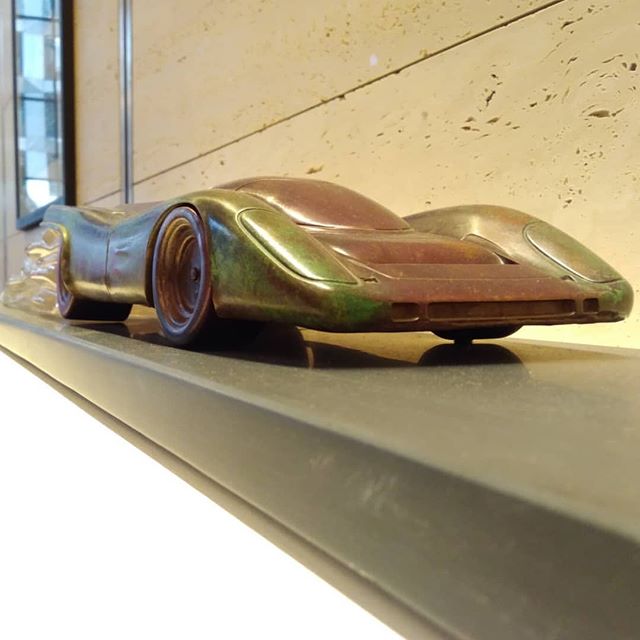 A new installation at the fabulous ArtMoorHouse Gallery London Wall London. Three of my editions for a month were available for viewings and sale. This image shows a quick snapshot of this edition after patination, the amazing lighting at this awesome gallery so helps the feel of speed and the kinetic effect on the sculpture 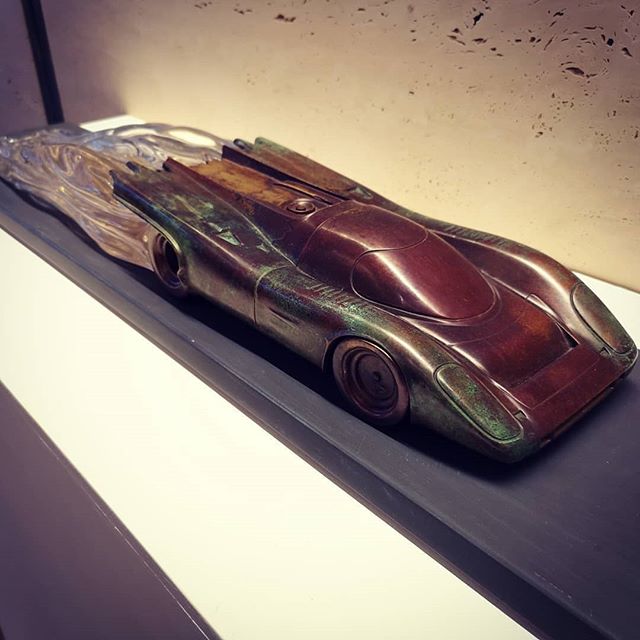 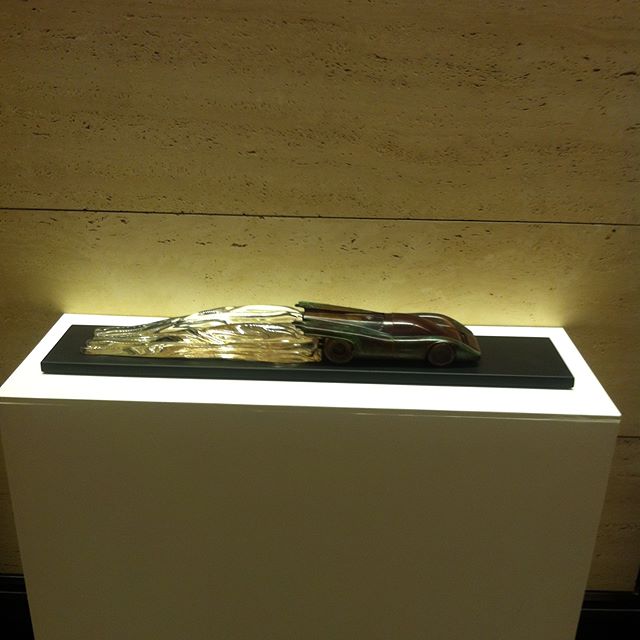 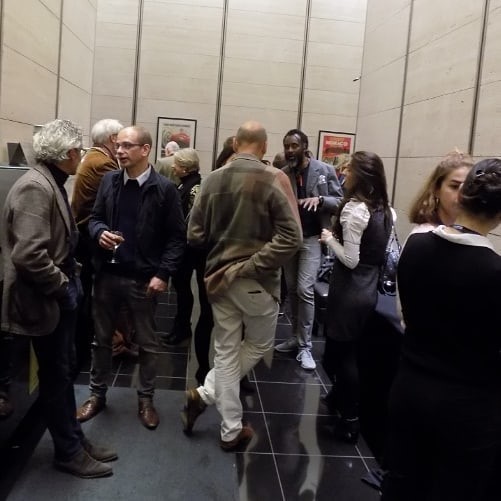 So happy that not one but two editions of my ‘Tally-Ho’ limited prints were sold at a auction as well as one of my ‘Endurance’ Porsche 917 prints with all proceeds going to the JBVC Foundation at a dinner held in London recently, numbers 40/45/46 out of only 100 to be available signed by myself 75x50cm on acid free stock litho printed by hand.

A total of close to £1200 for the three editions, the evening raising close to £50.000 with further donations later added to this very worthy cause. www.jbvc-foundation.org.uk and thankyou to Dr Johnson Gideon Beharry VC for your very kind letter of thanks 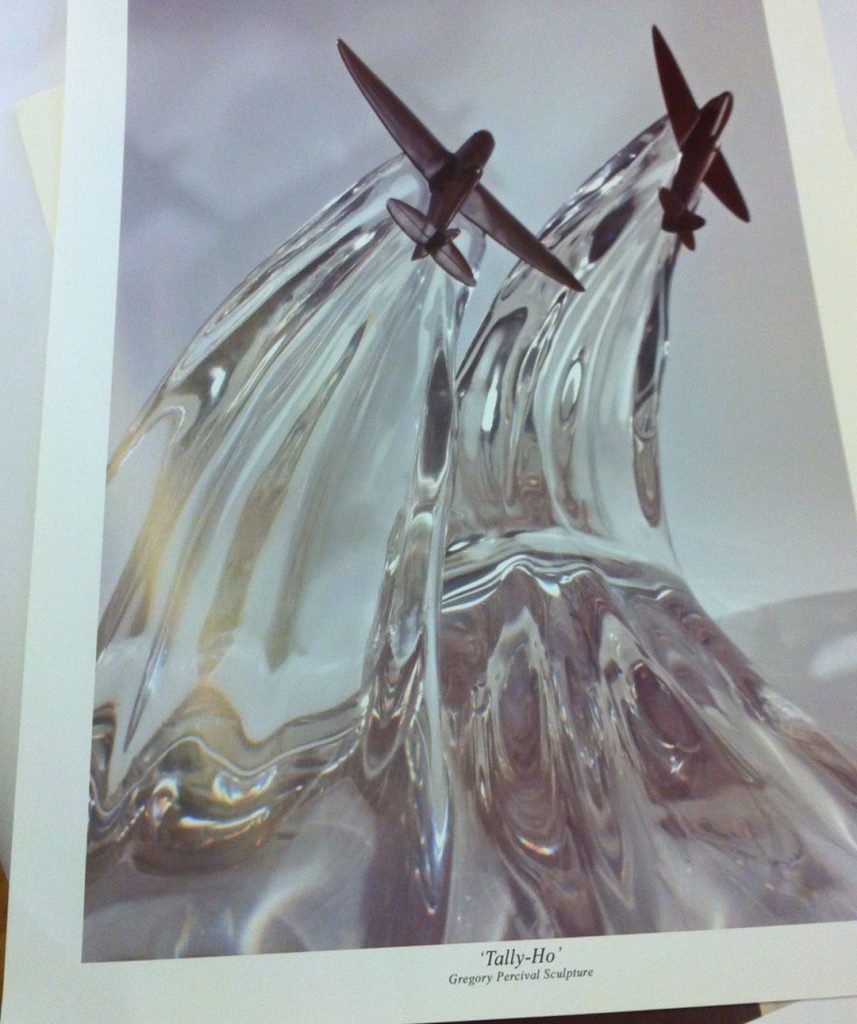 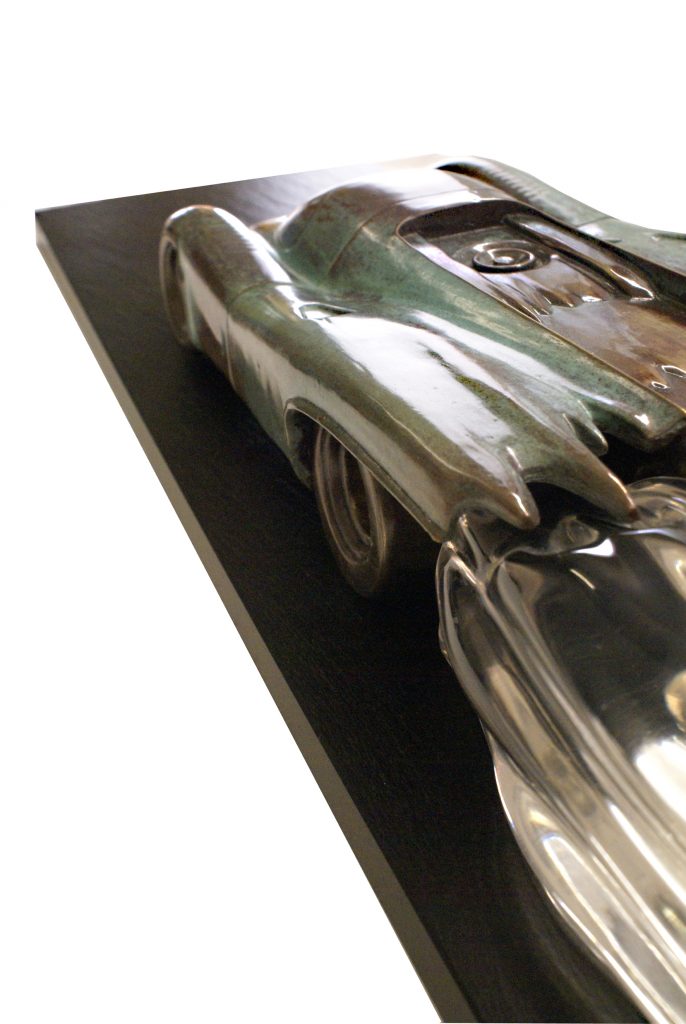 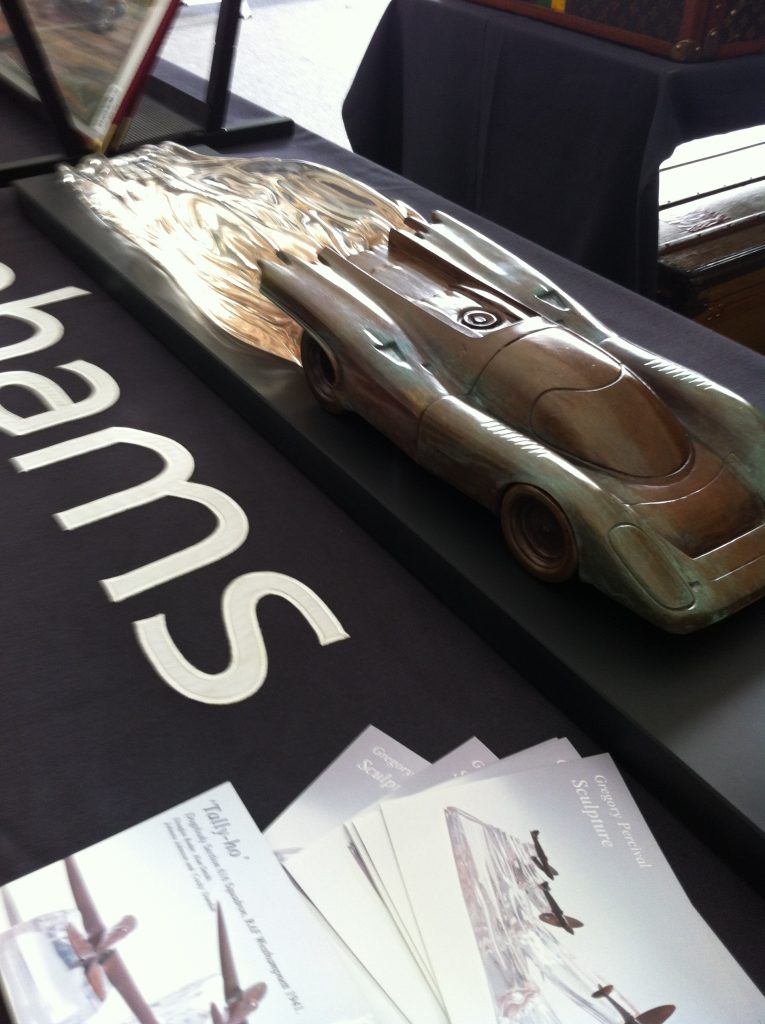 The 917K became one of the most iconic sports racing cars of all time. With its high
power and blistering speeds, it was elevated further by Steve McQueen through his 1971
film Le Mans.

Depicting car and driver flat-out on the Mulsanne Straight in 1970, this work pays
tribute to Steve McQueen and the equally revered Porsche 917K.

The result of 2 months labour on the original sculpture, it comprises 8 individual
bronze castings, with an overall length of 35cms and is available in solid bronze or
sliver plate over bronze. The sculpture is currently being updated with an additional
‘wake’ of resin glass behind the Porsche to give it the extra dynamism I have always
desired. This new addition took a further week on the clay sculpture and increases the
overall length of the piece to 76cm.

Each casting and polishing process takes 5 days of dedicated labour with 4-6 weeks from
order to completion.

Solid bronze and glass clear hand polished resin set on a slate base.

Artists Proofs: 2 of each- sold,  Individually numbered and signed.

Edition: 10 of each, Silver version and the new ‘Patinated’ version (see below) Individually numbered and signed. 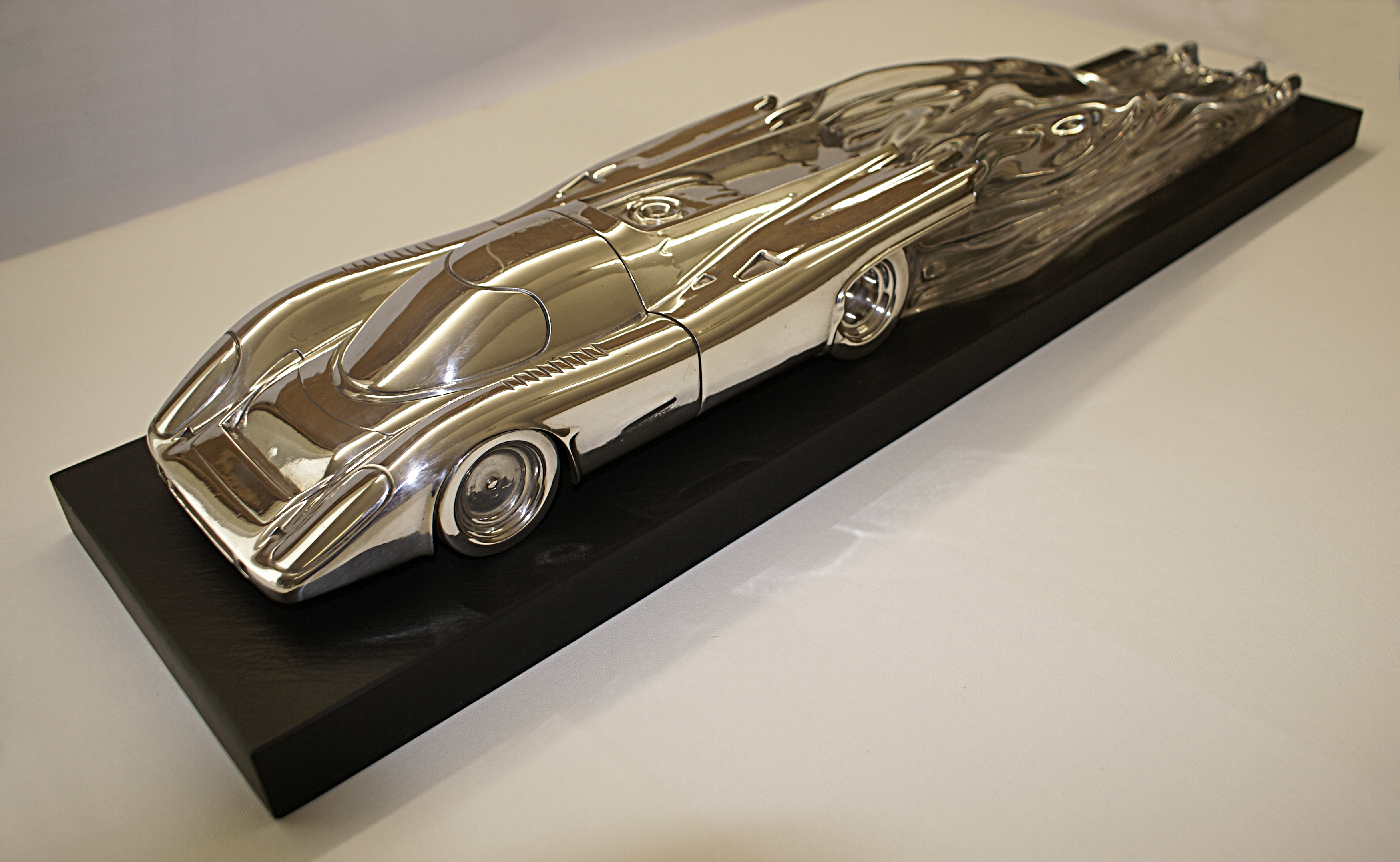 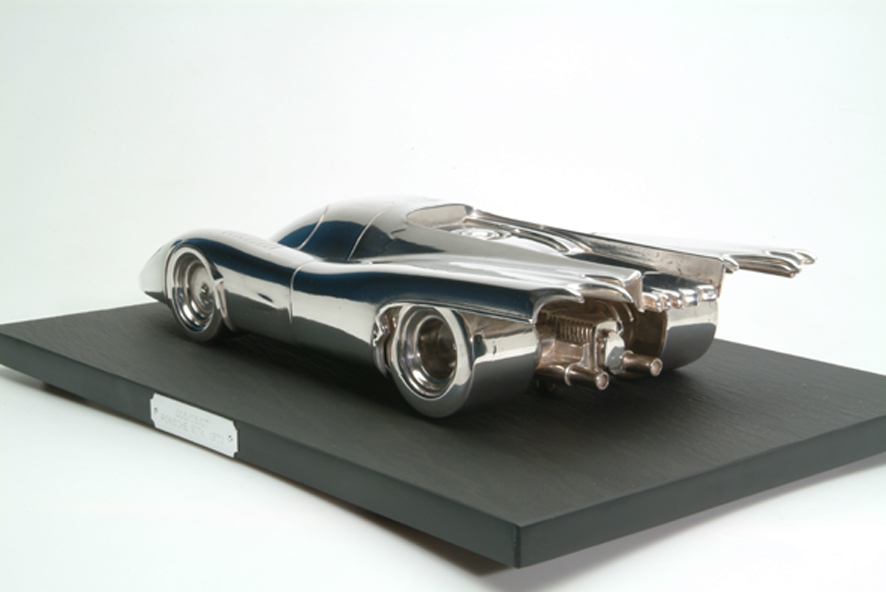 I am very pleased to inform everyone about my latest news which hopefully will generate a good amount of money for Fly2help.
On Wednesday last week i saw TobyWilson at the Bonhams Auction, Festival of Speed and showed him the new work as described below. He was very very complimentary and signed the work-in on the spot. It was shown over the weekend and will be further exhibited at the Beulieu auction with the actual auction sale taking place during the Goodwood Revival weekend Auction on Speptember 15th. Last year as you know i sold an edition of Tally-Ho for the RAF Association £7000 including buyers premium, so lets hope this year i can generate even more. Fly2Help will be the only charity benefiting from this sale of which i am going to give 50% of the proceeds to.
Fingers crossed for a good sale, also please use any of this information to help market the sale and
boost the bidding
Yours
Gregory Percival   aGava
Information:
This is the very first time this piece will have been seen by anyone
The original Porsche 917k sculpture was created about 7 years ago but i needed to extend the work to make it more dynamic. My new aviation work over the last two years using the Glass clear material provided the medium to do this. The extension at the back is a separate sculpture which i made originally in clay then made moulds to cast the clear material.
The piece offered will be the first of two artists proofs, the entire edition after this being of ten editions only, so this one will be AP-001/002
The Porsche is an 8 piece casting in Bronze with Silver plate, total length of the work is 81cm and weigh in excess of 10kg
http://www.bonhams.com/auctions/20931/lot/29/?page_anchor=MR1_page_lots%3D3%26r1%3D10%26b1%3Dlist%26m1%3D1 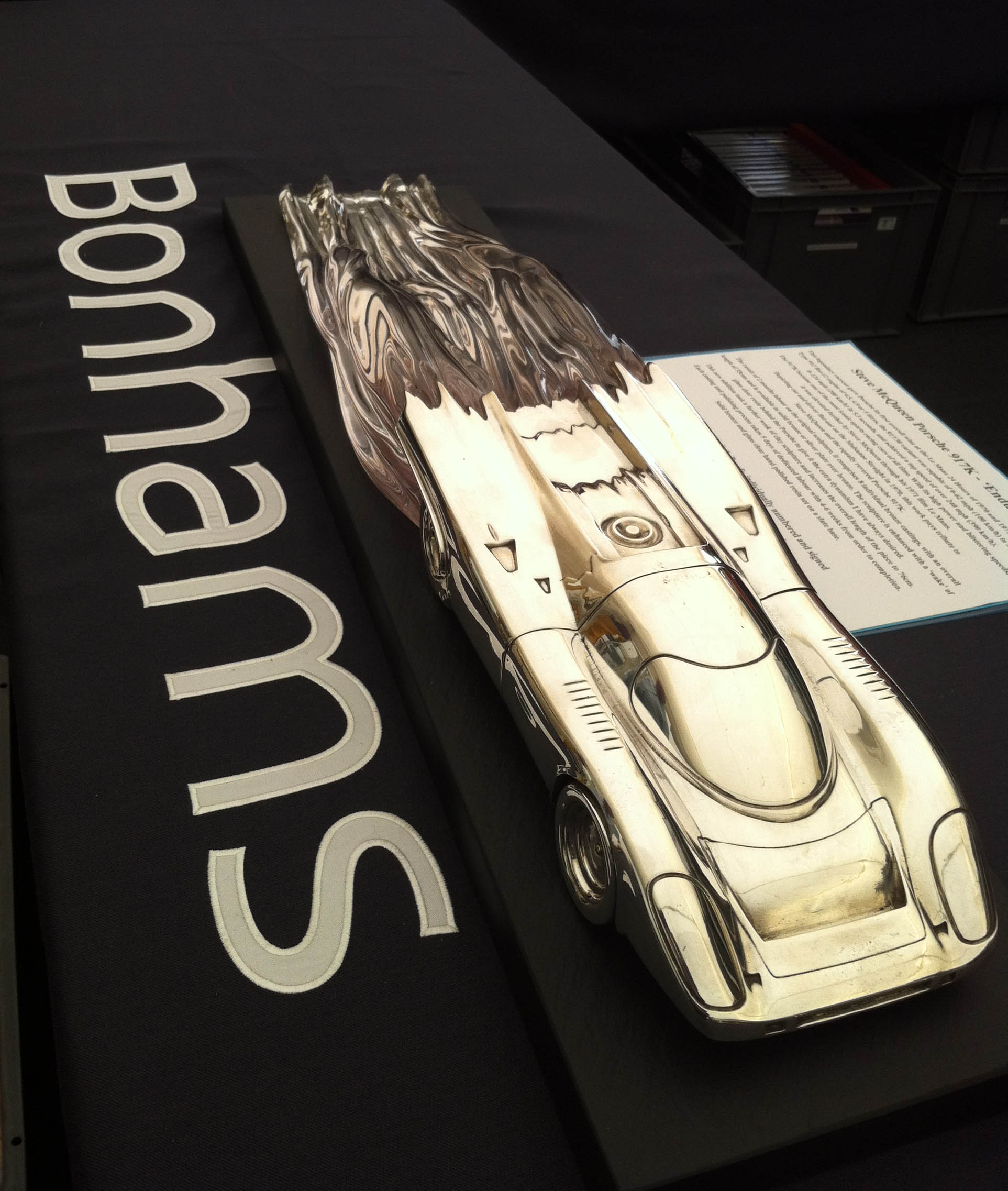 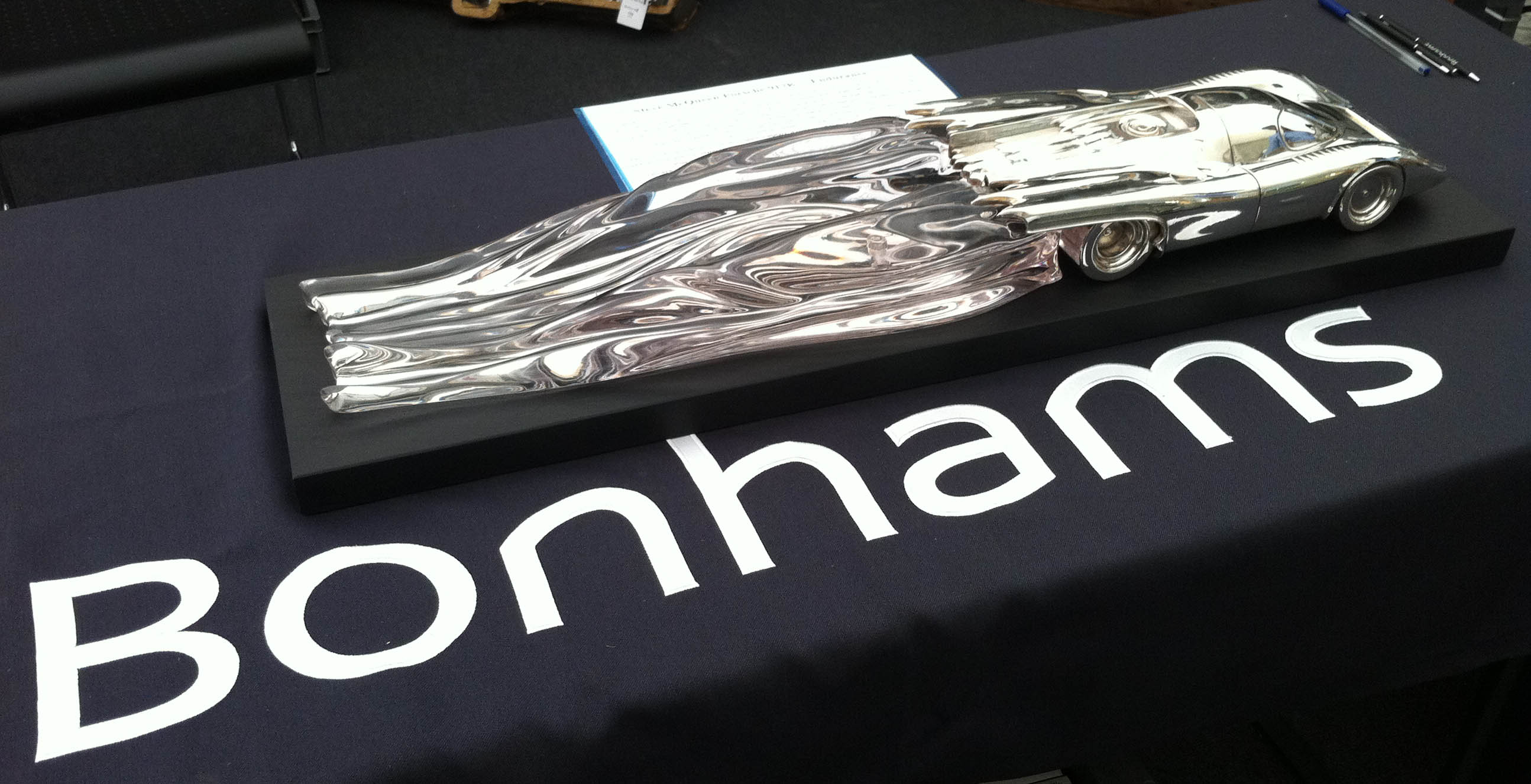 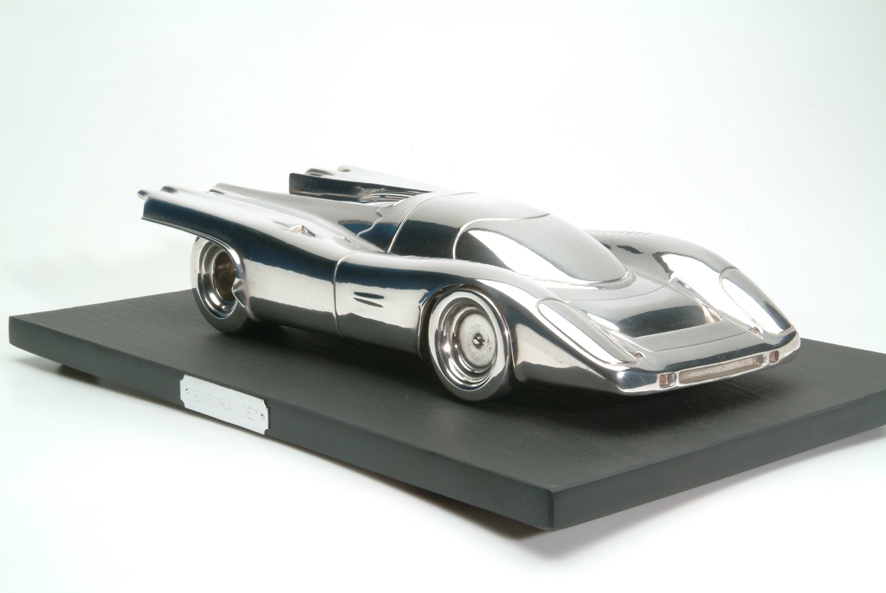 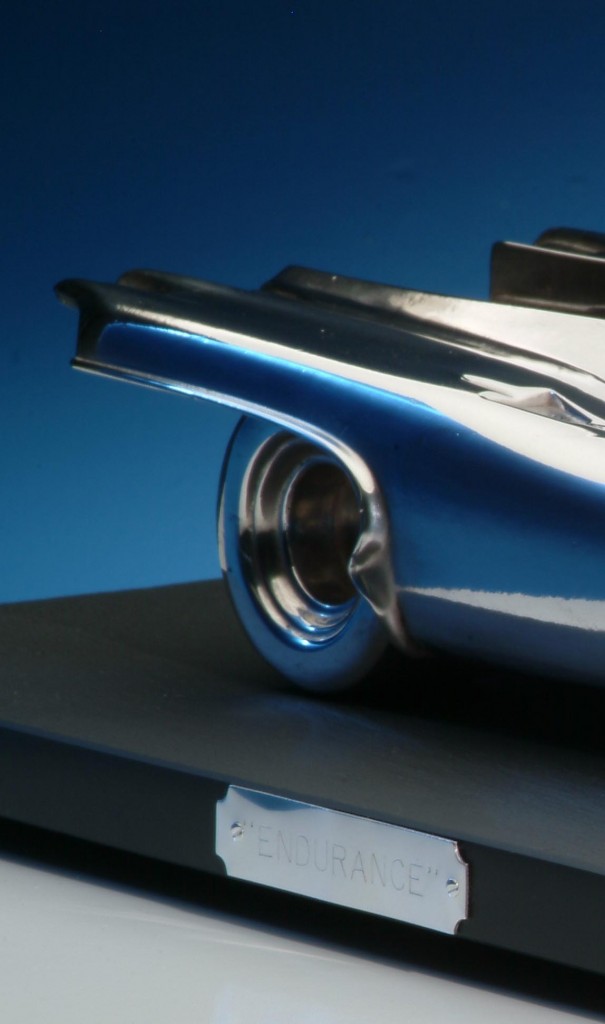 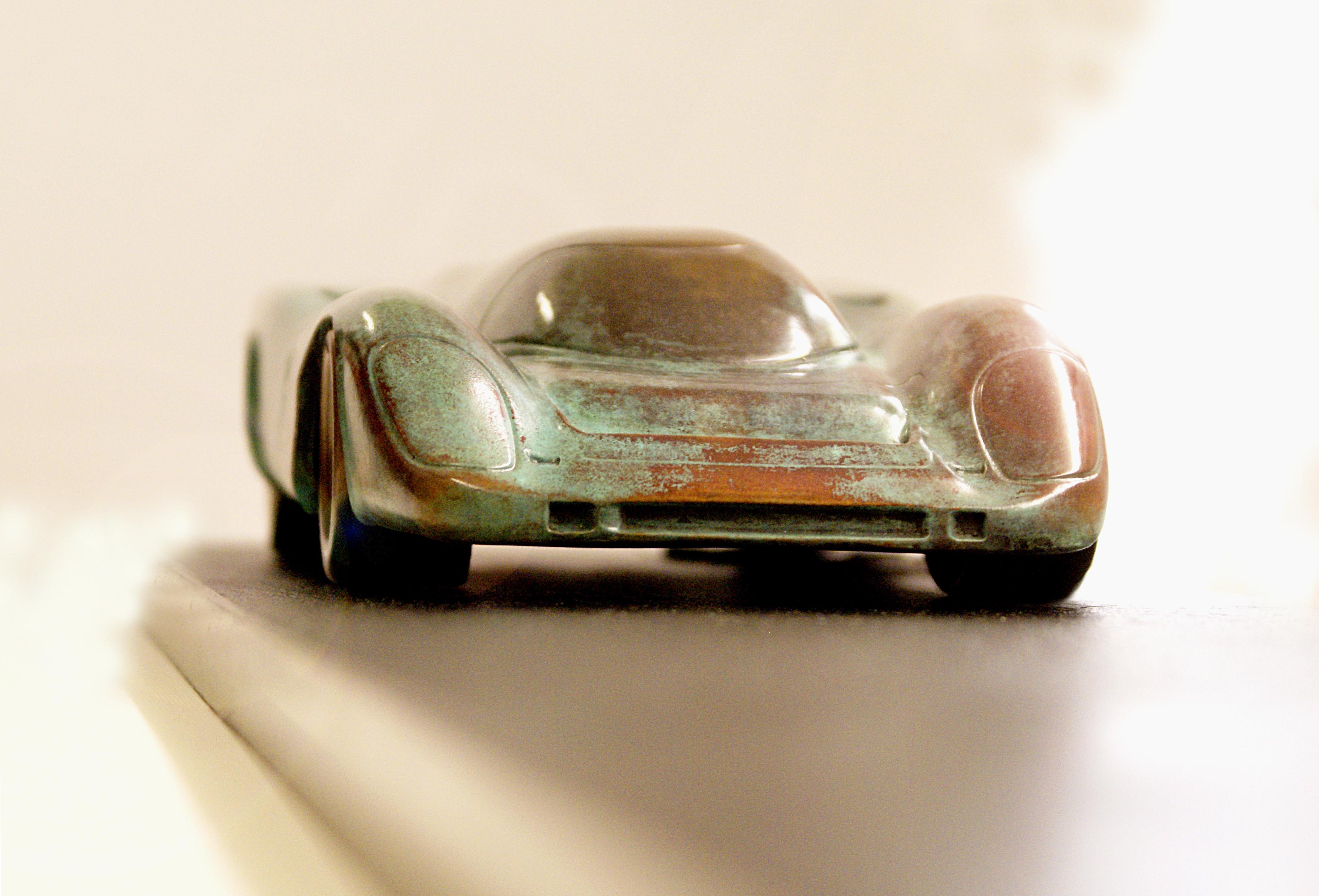 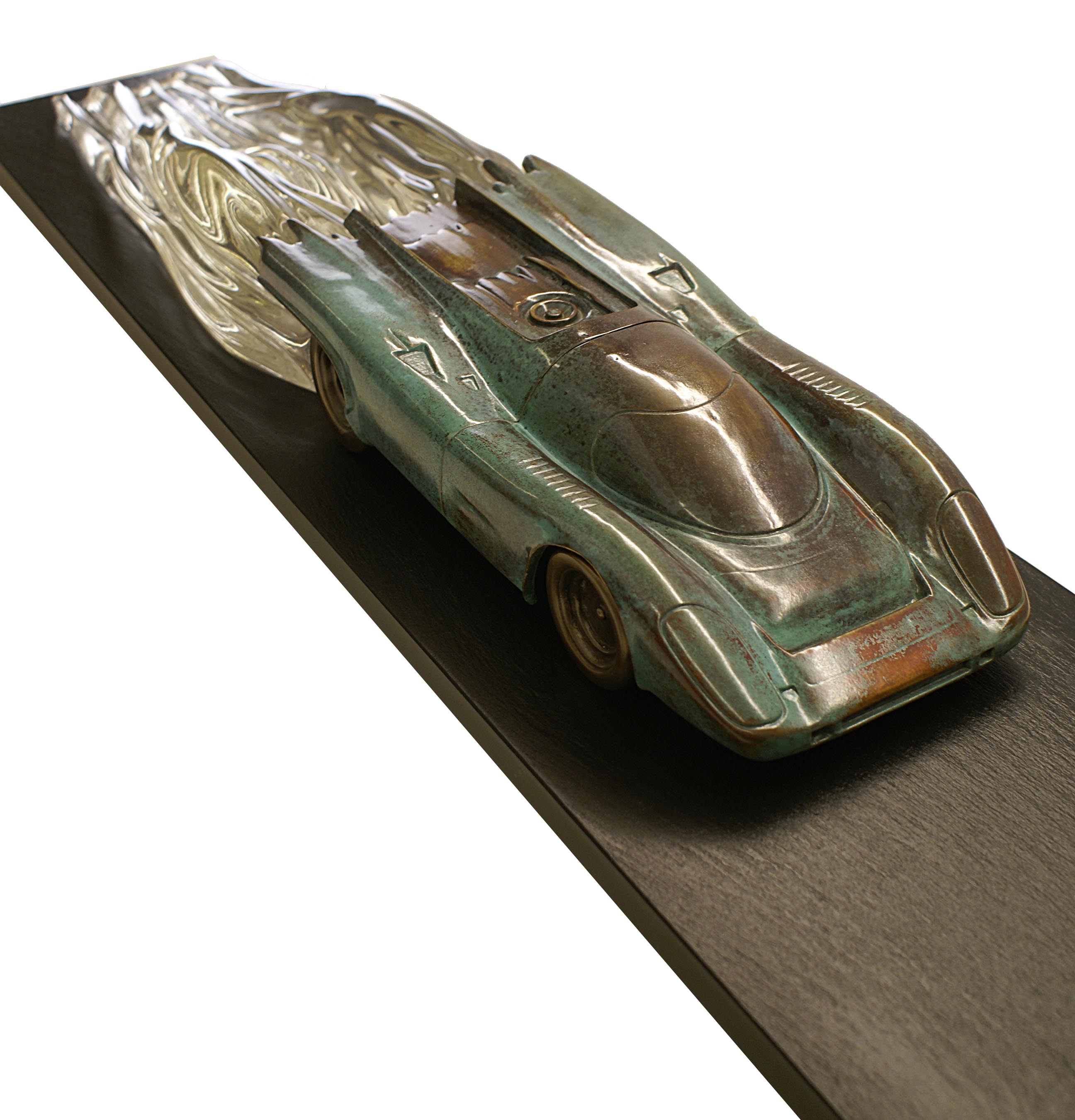 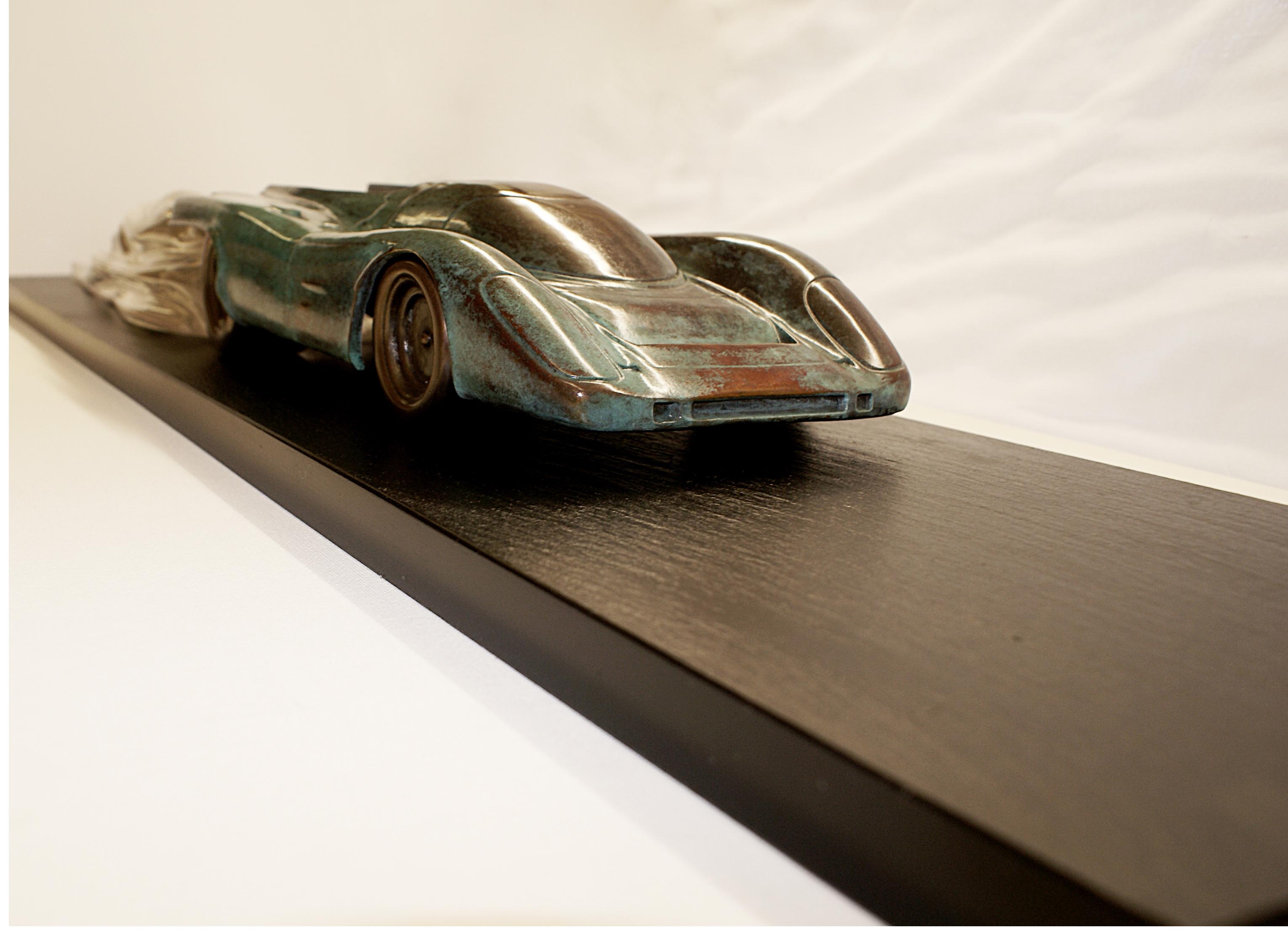 First shots of my new patina work on the second artists proof of endurance, very hot and lots of chemicals where used to create this green/blue surface then an enormous amount of wax applied to create a glassy surface. This has the same glass clear extension as the Sliver plated bronze edition.

This is the second of the two artists proofs AP002/002 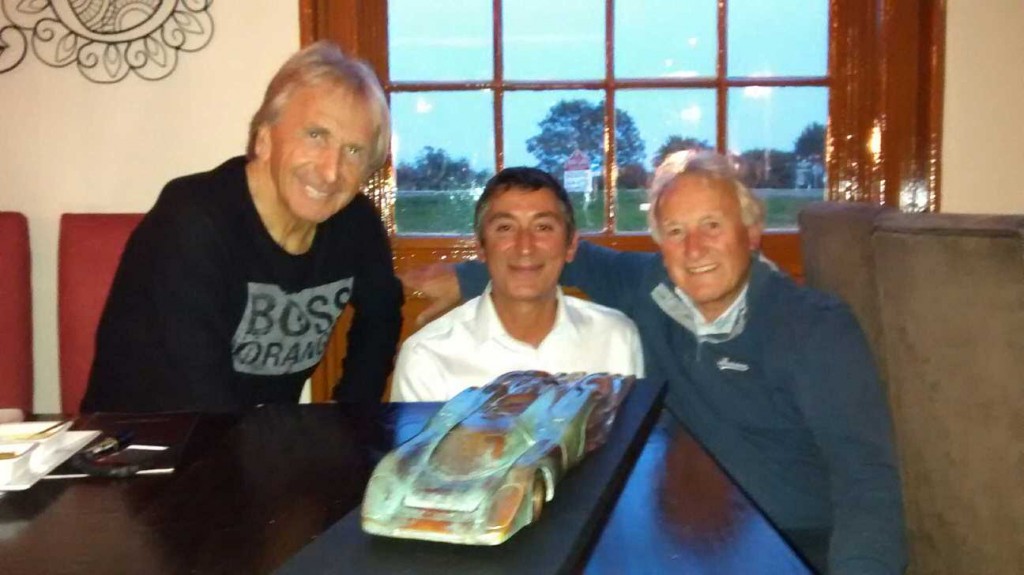 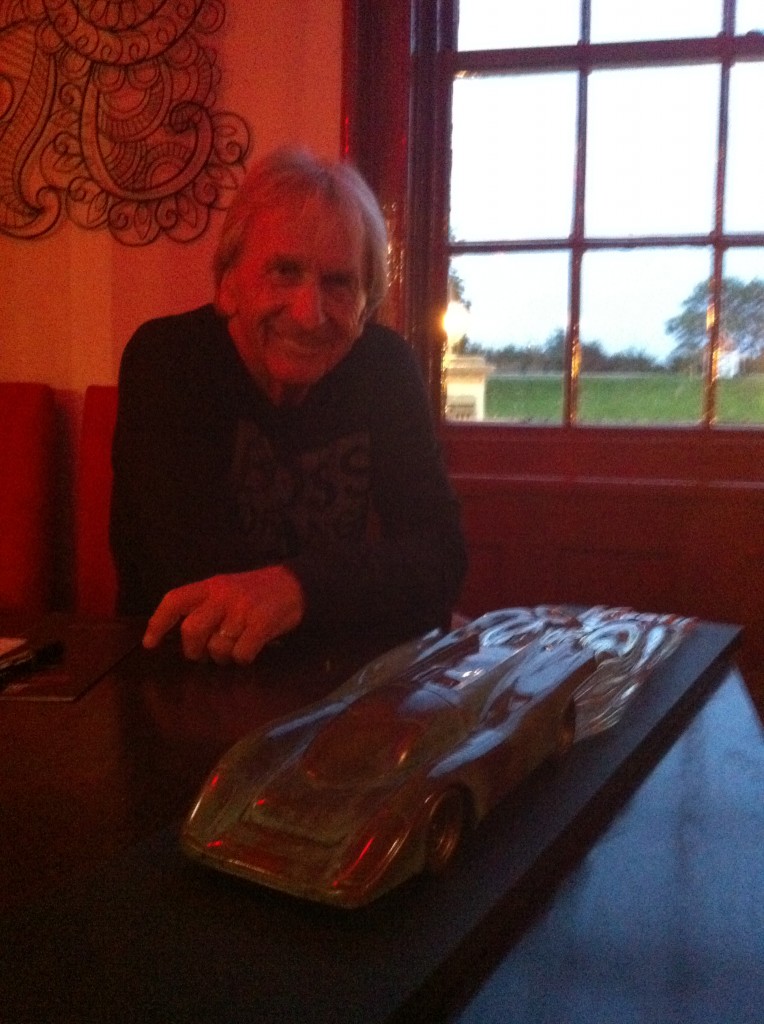 Bell is best known for winning Le Mans 24 hours race five times, in 1975, 1981, 1982, 1986 and1987, making him the most successful British driver in the race to date. He was teamed with the Belgium Jacky Ickx in 1975, racing the Gulf Mirage GR8, again in 1981, racing a Porsche 936 and finally in 1982 racing a Rothmans Porsche 956. The Bell/Ickx partnership is considered as one of the most famous pairings in motorsport history. Bell went onto win the 1986 and 1987 Le Mans teamed with Hans-Joachim Stuck and Al Holbert racing a Rothmans Porsche 962.

His first Le Mans was in 1970 in a works entered Ferrari 512, with co-driver Ronnie Peterson, his last in 1996 racing a McLaren F1 GTR. Bell achieved his highest ever speed at Le Mans at the 1971 Le Mans 24 hours April test day, reaching a calculated top speed of 246mph on the Mulsanne straight in the JW Gulf Porsche 917LH.

Derek Bell took part in the filming of Le Mans (1970) starring Steve McQueen, and he and his family lived with the McQueen family during the filming, the two becoming friends. Bell had a lucky escape during the making of the film. The Ferrari 512 he was driving suddenly caught fire whilst getting into position for a take. He managed to get out of the car just before it was engulfed in flames and suffered minor burns. Although the car was badly damaged, it was later rebuilt and is still racing at historic meets.

These photos show the rough casting at the foundry, then the chased and ground clean sections in a sterilising bath after being polished and finished prior to the final patination. Start to finish of a Porsche 917k ‘Endurance’ Body. 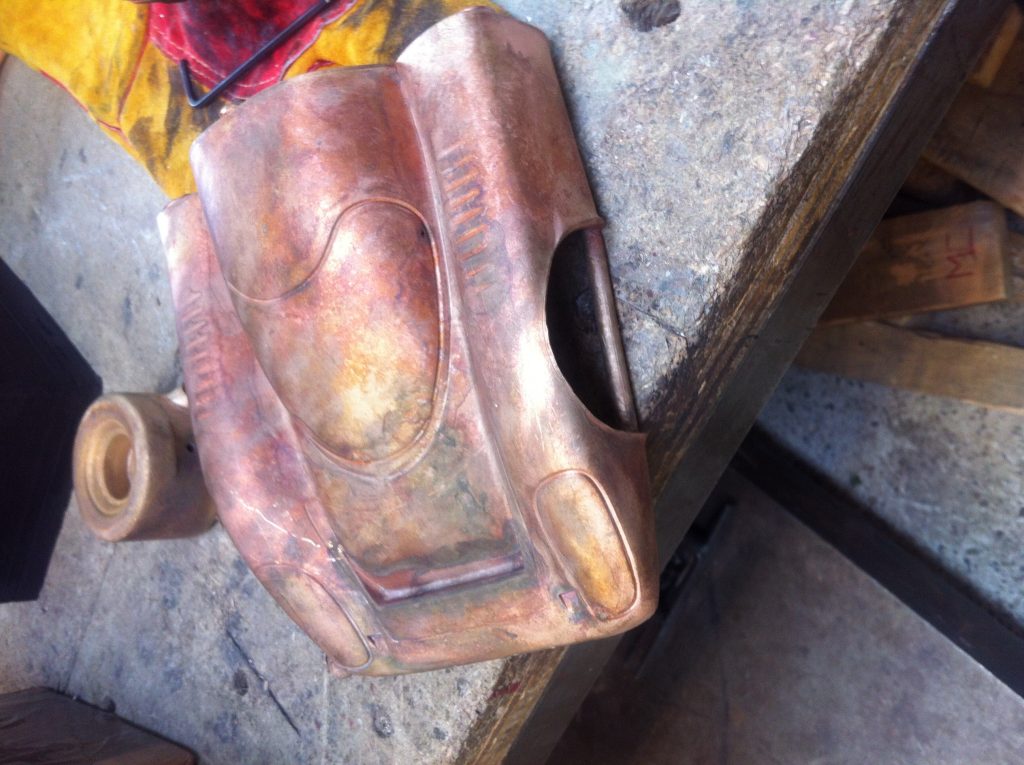 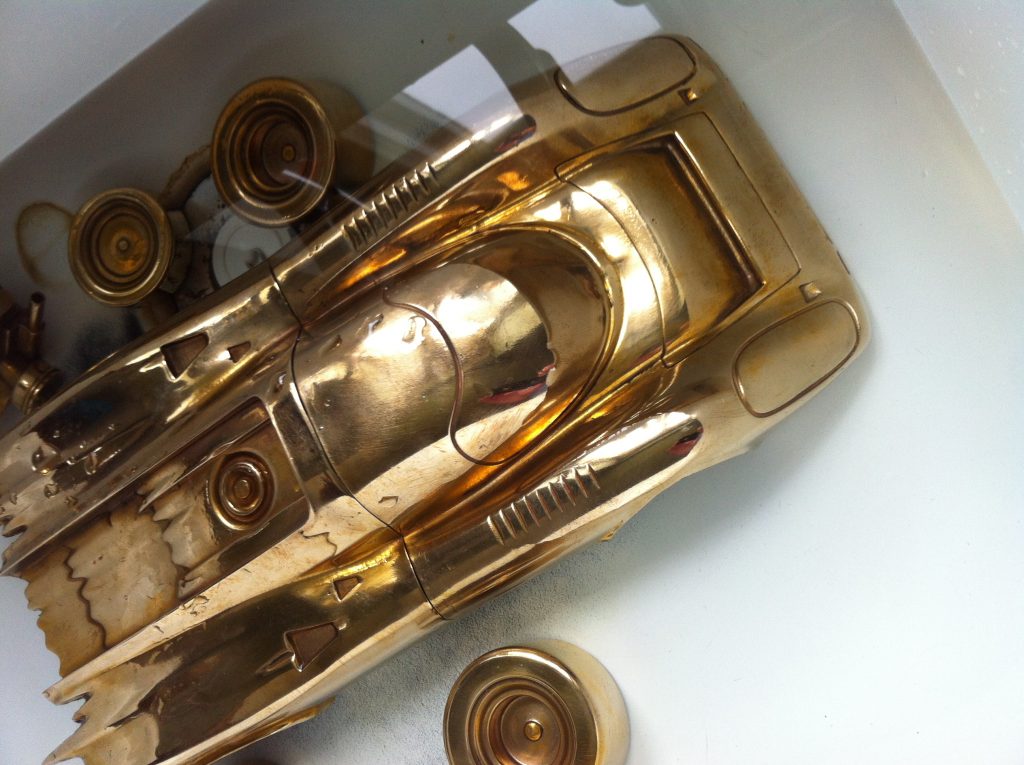 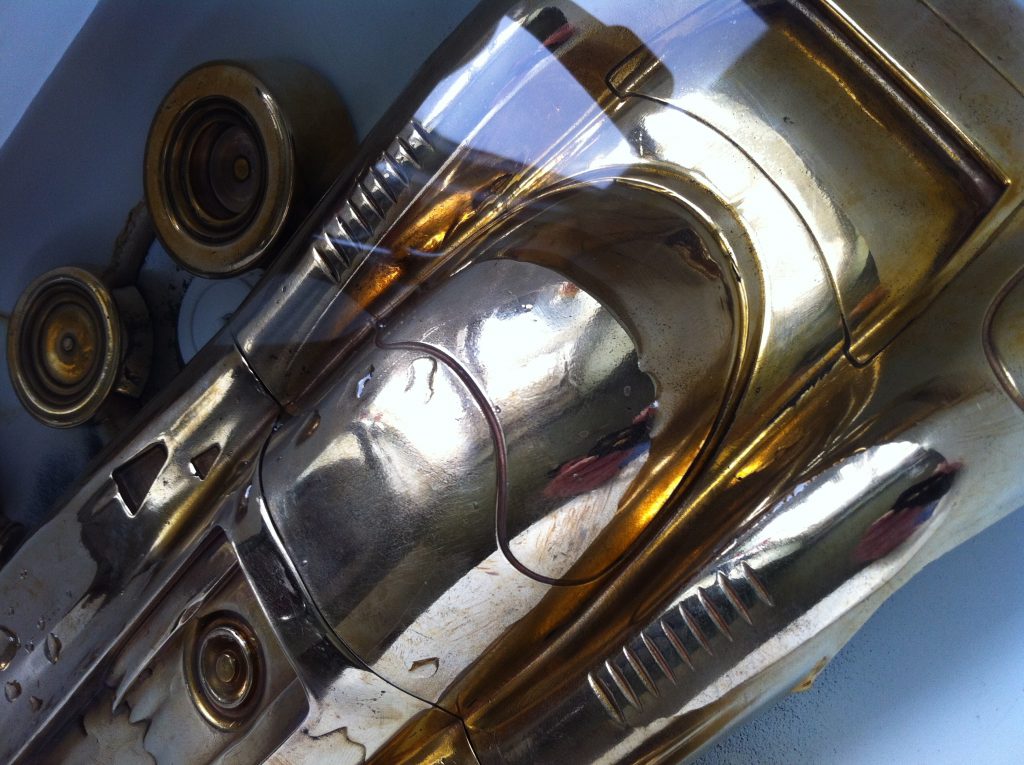